“Uko” by Avril Kenya is a sensational RnB track that hit the Kenyan airwaves on 9th April 2017. The track got a lot of positive reactions and critics on YouTube! A very crisp and beautiful video accompanied by great audio production from the renowned Pacho Group award winning producer CEDO  who’s the man behind the hit song “Mungu Pekee" by the versatile Kenyan rapper/singer  Nyashinski .
Uko by Avril talks about how the artist is fed up by his assailants and haters. Asking them “where are they?” They pretend to care about him yet they’re  the same people who are behind her downfall.
Symon Tokal is an RnB artist. Specialized in this genre very well. Through the help of his talented Producer…Prod/Dj Tasla … he recorded a sensational cover song for Avril’s uko. Reason? The song touched him and his producer. The chemistry goes on well and the track successfully done! On a beautiful beat remake from Prod/Dj Tasla and the vocal prowess of Symon Tokal, comes an output worth to the ear and the eye.
A simple video shot in front of the microphone in studio to accompany the audio. This is something everyone has gotta wait to hear and see. Let’s hear the feminine Avril’s vocal emanating from a masculine Symon Tokal vocal and our very own Syn City Music producer Tasla representing CEDO of Patcho Group.
Release this week! Let’s hear the critics soon!


Watch the official track "Uko" by Avril from YouTube. Link below:
https://youtu.be/eclfWEX8JrE 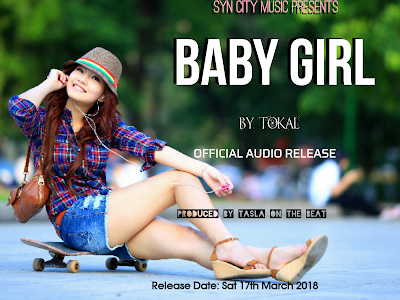 After an almost career threatening hiatus, Symon Tokal is back!!Re-branded himself to “Tokal” (just dropped off the Symon). This time out, it’s a new RnB banger on standby! This track going by the name #BabyGirl is getting released on Saturday 17th March 2018.. an official audio release. Produced and mastered at Syn City Music record label by the talented producer Tasla on the Beat ,its something to make you remember that we only live once so so just need to speak your heart out! To the ladies out there, this is for you.. the boychild opening his heart out  and telling you a frank “IMMA FALLEN IN LOVE” is really a romantic thing!! Less stories, you’ll be able to play and download this track from all online audio platforms. At the moment, you could download and enjoy listening to his other releases from the link below.. Remember to subscribe to his YouTube channel for more feeds. More love! Youtube Link:  Tokal Videos
Read more